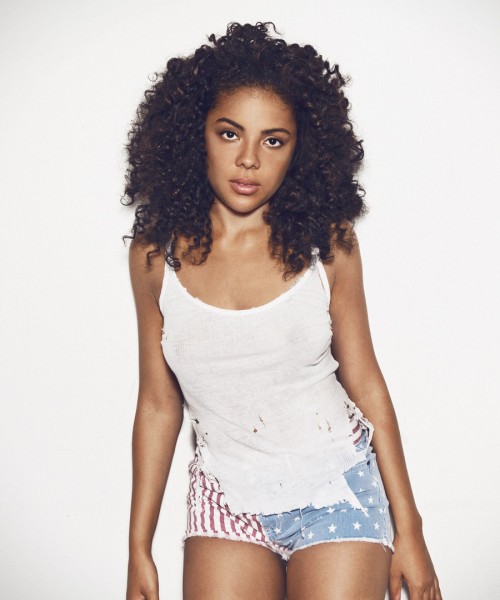 The singer chats about her debut album, Hey Hey Hey

When Mapei’s single “Don’t Wait” was released in late 2013, it immediately landed the 30-year-old singer in the spotlight and got tongues wagging about the new-on-the-scene Swedish chanteuse. A year later, Mapei has taken the smart, soulful sound that made “Don’t Wait” so accessible and expanded it to an album’s worth of sounds: Hey Hey Hey, out September 23.

Here, the singer chats with DuJour about traveling the world, finding the inspiration and what’s next for her—including a big tour with Lykke Li.

When “Don’t Wait” came out last year, you immediately got a whole lot of attention. How was that?

It’s wild; now the song has seven million plays on Spotify. I get all these amazing opportunities, for example, John Legend called me and asked if I wanted to go on tour with him because he loved the song. Now I just want to keep writing, working in the industry and continuing to develop and learn.

Is that kind of spotlight overwhelming?

Hey Hey Hey is your first full album. Did you set out to write an entire record?

I was in North Brazil in a place called Recife and I loved the colors—the beach and the colors of the buildings. I spent time in the favela there, and I would sit on the steps with the old ladies and just observe them and their fashion. It’s run down, but it still looks cool.

I didn’t want to write music for myself that much when I got back to Sweden, so I was mostly writing for other people. I was in a studio with a guy called Magnus Lidehäll who’s produced songs for people like Katy Perry and Kylie Minogue, and he said, ‘I have all these instrumentals that’d really suit you, can you come record them?’ I just started improvising on that, and we were like, yeah, let’s start an album!

You’re quite the globetrotter. How has that impacted the way you write?

Growing up, I was really dark—almost like Daria, with hoodies and glasses and listening to Radiohead all the time. But now I have more fun and I enjoy life. Travel is very important, but the stillness of being home inspired me also.

Is there any place besides Brazil that was influential for the record?

America. Being in American neighborhoods, just hanging out in church with my family members or watching old movies or singing old school blues songs.

The things that I write for myself are kind of like social commentary. It’s not very political, but serious. It’s commentary on how things are and what needs to be changed. When I hear the instrumentals to the song, I just want to simplify it more and make it more accessible to my audience. The poetry I write on my own is more complex than the music I make.

How is the music you’re making now going to translate into a live show on your upcoming tour with Lykke Li?

It translates well. It’s very theatrical. I have this song on the album called ‘Second to None,’ and it’s kind of a spoken word piece. That’s what I start out with in the show, then I just turn into this beautiful butterfly. I come out of a hip-hop cocoon and sing ‘Change’ and I have amazing choreography and all sort of wonderful stuff like that.

Putting Perfume Genius to the Test