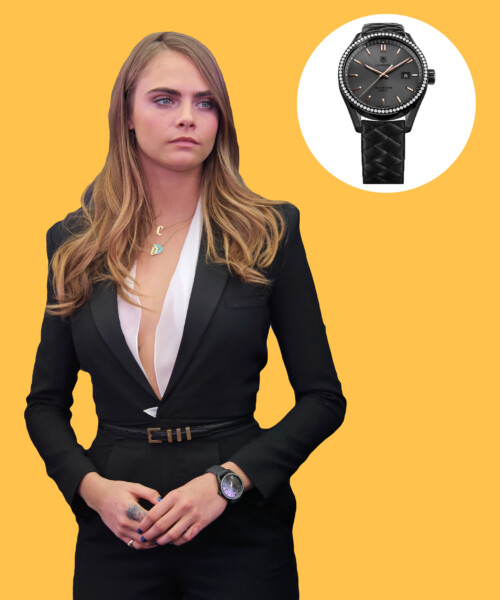 All the details of the British supermodel’s supersized watch

Despite her aristocratic lineage, model Cara Delevingne is considered a wild child in the fashion world. Delevingne dates whomever she likes (she has been linked romantically to One Direction’s Harry Styles, actor Michelle Rodriguez and musician St. Vincent) and does whatever she wants (like publically palling around with Rihanna and Taylor Swift). The model/actress is also a social media star, with over 1.38 million Twitter and 4.4 million Instagram followers. Delevingne has no fear of the paparazzi when she controls her own media exposure.

We like to think of Delevingne as a millennial falcon—a rare bird who has become a face of her generation. Which is why it should be no surprise that Tag Heuer was happy to land her as their newest brand ambassador. One of the perks of her role is having her own watch, the Tag Heuer Special Edition Carrera 41mm Cara Delevingne.

While the watch won’t be available until September, Delevingne previewed her signature timepiece at the 2015 Monaco Grand Prix. It’s a big statement watch that’s based on the 41mm Lady Carrera with a Swiss made Quartz Movement. But instead of a stainless steel case, this model features a basic black titanium-carbide coating and an anthracite dial.  In contrast to darkness, Rose Gold-plated matchstick indices and hands heat up the face of the watch.

Like Delevingne, the rest of the look of this Special Edition Carrera is fashion-forward and versatile. The watch is available in six variations: With or without diamonds, black or white diamonds and a choice of a padded, aged calfskin strap with checkerboard stitching (like the one pictured here) or a titanium carbide-treated black steel strap.

And as a further tribute, the case back of the Special Edition Carrera Cara Delevingne is embossed with the head of a lion that is also the symbol for Leo, Delevingne’s sign.  And the inside of the leather strap bears her signature in rose gold.

As a trendsetter, Delevigne is the It-girl of this decade. We can’t wait to see how her choice of wristwatch will influence her followers.

Tags:
GALLERIES
STORIES DUJOUR
What to Click Next
Connect With DuJour
Next

Words of Wisdom from Our Dads