At the heart of New England’s biggest city, downtown Boston is buzzing with development; and we’re not just talking about within real estate, but also within its food and beverage scene. As the seaport area concludes major renovations, boasting rooftops for seasonal watering holes, and the theater district flourishes with a mix of enduring and contemporary culinary hotspots, Boston is reveling in its trending foodie scene. Though Boston is regularly referred to as the ‘hub,’–famed for its number of campuses housed throughout its more than 21 neighborhoods–it seems the city is finally being recognized as a modish destination for millennial travelers. Here’s how to spend the perfect weekend indulging your way through Boston.

In the midst of an emerging neighborhood stands the 26 stories of W Boston; a property that recognized the area’s potential before it defined itself. Celebrating its ten year stint in Boston’s theater district, just a short stroll from the city’s iconic Beacon Hill, and a quick cab ride to the Seaport, W Boston recently renovated its suites to reflect the city’s rebellious history. The theme reflects the brand’s ability to understand and embrace significant historical events in Boston, from the Boston Tea Party to the underground rock n roll scene, emphasizing the likes of Steven Tyler and Aerosmith. 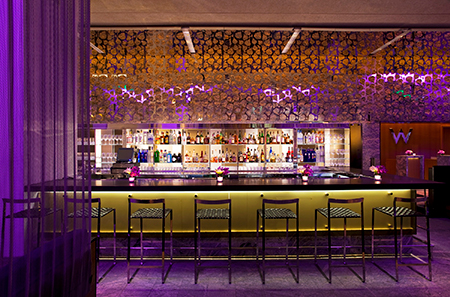 In addition, W Boston flexes its finger on the pulse of the city by infusing its booming food and beverage scene into their offerings, like with their live DJs and performances in the W Lounge, weekend jazz brunches in The Gallery, as well as their most recent partnership with the Barbara Lynch Collective, affirming their belief in Boston as a culinary destination. Through the long-term partnership, guests will be able to book a reservation at any of the Boston chef’s restaurants, with access to an insider menu item or special deal.

Where to Eat and Drink:

It’s a no brainer that as a guest at W Boston, you’d look to reserve a seat at the French, Italian-inspired No. 9 Park; where the Barbara Lynch Collective began. Cozy up with a view of the state house, a fresh daiquiri and a can’t-miss order of Prune Stuffed Gnocchi. If you’re looking for Italian comfort food, warm up with a bowl of bolognese at Sportello in the Seaport or venture to the North End for authentic antipasti like stuffed zucchini flowers at Bacco. For brunch, mozy to The Beehive in the South End, an underground favorite for unique cocktails and live jazz, or explore the Seaport with Mediterranean favorites like eggs shakshuka at Committee. For a night out, snag a stool at Drink, a bar entirely dedicated to the craft cocktail; if you wish, no two drinks will be the same.

In the summer:
As Boston’s sidewalks swell with the warm weather, everyone looks to dine al fresco. B&G Oysters offers a downstairs patio that serves oysters so fresh, and is removed enough from the sidewalks, that you may just forget you’re in the city’s South End.

For a taste of Boston’s rooftop scene, head to The Envoy Lookout Rooftop in the Seaport. If the line is too long, try The Barking Crab for a lobster roll or lobster bisque for similar views over the newly developed Seaport skyline. For brunch, check out The Butcher Shop for a mouthwatering bloody mary aside windows that open up to the bustling streets of the South End for a warm weather vibe you won’t want to miss.

If you’re looking to do more than eat out and drink up, a stroll through the neighborhoods where all these culinary favorites are located won’t disappoint. From the brownstones of the South End, to the contemporary architecture and waterfront in the Seaport, and the artsy atmosphere of the theater district, there are enough sites to have you meandering around for a whole afternoon. Don’t forget to wander through the Boston Common too; most alive in the spring and fall, with magnolias and foliage. If you’re looking to laugh off the calories, catch a comedy show at Improv Asylum or LAUGH Boston. For the art enthusiast, absorb a collection of inquisitive and multimedia art at the Institute of Contemporary Art. Or, if you desire a more personal showcase, W Insider Remy Tucker recommends visiting SOWA First Fridays, where local artists open their studios and showrooms to the public every month. Tucker also advises heading to Wally’s Cafe on Mass Ave. for a night of live jazz.