On a perfectly balmy 70-degree afternoon in Los Angeles, Evan Rachel Wood[1] is sitting in the back of a private studio lot, posing in the driver’s seat of a vintage Cadillac Eldorado. She looks like she feels right at home. Her chill demeanor makes her completely personable, so much so that its almost hard to remember that she’s Hollywood royalty. The actress has grown up in the spotlight, but she couldn’t be more humble. “Honestly, I like to just sort of let things in my career happen ’cause then you’re always surprised,” she says. “You’re never disappointed.”

But with a career as strong and solid as hers—and a voice to match—it’s clear her future is far from waning. For starters, this winter she lends her vocal greatness to Disney’s Frozen 2[2], playing the voice of Queen Iduna. The animated film is something she’s been dreaming of doing since she was a child. (She also has a doll in her character’s likeness, something she finds hard to believe even as she was holding it on set.) “I started in musical theater, and Disney and musical theater kind of go hand in hand,” she says. “The whole experience [of playing Iduna and having a doll designed after her] is pretty surreal. Literal dream come true.” One of the things she fell in love with when it came to the script was the fact that the story line went so deep. “It’s about finding oneself and about resilience. I thought it was such a beautiful story.”

Another dream come true for Wood? Working on HBO’s Westworld[3], which will debut its third season this spring. “I think my character is evolving and is discovering who she really is outside of the park, now presumably in the real world,” she says. “I think she’s starting to realize there aren’t a lot of differences between our world and Westworld. Every season, the show kind of reinvents itself.” When I ask her what spoilers she can share (obviously the answer is “none,” but the writer in me has to ask), she pauses and then reveals that what we can expect is a more linear story line. “We’re not jumping around times as much, and I think it’s a little more straightforward but still has that existential dread.” 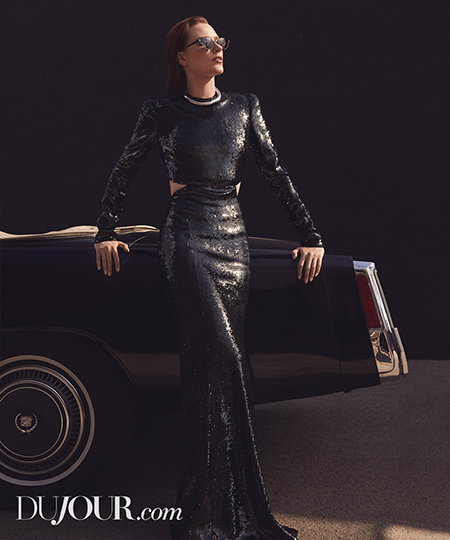 Playing sapient android Dolores Abernathy has taught Wood many things, but as for the biggest lesson, she says she has learned that she’s much stronger than she ever thought possible. “Every season, I get pushed to my absolute limit. It’s an incredibly difficult show to work on because of the amount of work that we’re doing in such a short amount of time,” she says. “The hours are long; the elements are intense. This season, we did a lot of night shooting, so it takes a big toll on you emotionally and physically. We’re really getting pushed to our limit. Dolores has taught me resilience, strength, and vulnerability. When I put on the blue dress, it truly feels like I’ve become somebody else. And at this point, I just feel like I just let her in, and she does her job, and I just have to be the vessel for her.”

It’s clear that Wood is stronger than she realized in more than just acting—that fortitude applies to multiple facets of her life. Over the past few years, Wood has been an instrumental voice in speaking up for women affected by domestic violence. As a victim herself, Wood decided to testify before Congress[4] in 2018 about her experiences with assault in support of the Survivors’ Bill of Rights Act, urging the government to expand protections for victims. Now she’s using her platform to ask individual states to extend their statutes of limitations on domestic violence reports via the Phoenix Act[5]. The act recently became law in California, lengthening the state’s statute of limitations from three years to five years. “I just don’t feel like we live in a time where we can be silent about this anymore,” she says.

Wood says she lived with the trauma of the assault for so long that it began to affect her mental and physical health, which is when she finally made the brave decision to go public with her story. “I told my story[6] to Congress, and that was really the start of everything,” she says. “That’s when the founder asked me to testify on behalf of her bill. I was terrified, but I knew I had to tell the truth. [Through the process of sharing my story], I was met with a lot of new information that my abuser had abused a lot of other women, and so I went, ‘Oh god, this is worse than I thought.’ So I tried to collect all my evidence and see if there was anything I could do to stop it.” Regarding timing, she says, “You’re never really ready to share[7], but I was ready enough.”

And share she did, igniting a flame so bright with her story that she has garnered the attention of not only other abuse victims who’ve felt compelled to share their story because of her, but also the government. “It’s about just raising awareness and bringing domestic violence into the conversation, because it’s literally a global epidemic that’s not being talked about,” she says bluntly, as though it was her calling to share her story.

In her spare time, which I’m already convinced she has none of, Wood can also be found jamming out with her cover band Evan + Zane[8], which she formed with guitarist/singer-songwriter Zane Carney in 2018. For her, music is in her blood. (Her father was a singer.) “I do have a bit of synesthesia, so I can kind of, like, hear color and feel sound,” she says. “So music for me is really visual, and I get a really visceral reaction to it when it’s in my body and when it plays. And certain sounds and certain tones just are so healing and cathartic. I feel like language, as in just speaking, is really basic, and music is so much more complicated and subtle and nuanced. Just a sequence of four notes can unlock something deep inside of you that you didn’t know was there,” she says. “It’s my language, and if I didn’t have it, I don’t know what I would do.”

Clearly, her plate is more than full, but that doesn’t keep Wood from constantly thinking about what the future holds. “I just want to keep doing good work and keep working with good artists and challenging myself and seeing what the next thing is,” she says before pausing. “Or I’d like to write a book one day.” For Wood, the sky’s the limit.