Every year, New York’s big-box department stores window-dress for the holiday season. These annual window displays, with their heart and showmanship, make one feel like they’ve stepped right on to the pages of a storybook when walking down the street. Whether you’re visiting Manhattan for the weekend or you’re a longtime local, these windows are best enjoyed in the late afternoon, dressed warmly in a goose-down coat, with hot chocolate in-hand. Start on 59th Street and Fifth Avenue, and walk down to Rockefeller Center to see the tree.

On Fifth Avenue, it seems no one does the holidays quite like Saks. Each holiday season, the storefront gets into the spirit with its dressed-up windows and an after-dark light show. This year, Saks partnered with Disney for its holiday display and the designs were inspired by the film Frozen 2. The big curtain-dropping unveiling was a grand production, featuring a live performance by the voice of Elsa herself, Idina Menzel, and a multicolored light show with fireworks. The event, open to the public, attracted hundreds of fans and spectators, all watching with childlike wonder with hands clasped beneath their chins.

“Saks has always been about inspiring awe and wonder over the holidays,” Saks Fifth Avenue VP of Creative, Andrew Winton, tells DuJour. “When the opportunity arose to partner on a monumental project like Frozen 2, with its beloved characters, beautiful art, gorgeous music, and strong female leads, we knew it would be a perfect fit.”

While at first the Frozen franchise doesn’t seem to be such an obvious match for Saks’ high-end aesthetic, when viewing the windows, you can see that the partnership is indeed a perfect fit. Both Disney and Saks’ visual team were committed to every detail of the planning and execution. “We had two great companies really trusting each other with something very important to them–for Saks, it’s our holiday season, and for Disney, it’s this tentpole franchise. So, we had to spend lots of time getting the details right…from the music, to the colors, to the characters in the window. In the end, though, it’s all worth it,” says Winton.

The center-six Fifth Avenue windows are works of art every December, and this season is no exception. “We approached the windows like art installations,” Winton reveals, explaining that the jewel-toned windows aren’t meant to be exact replicas of scenes from the film, but that each design brings to life the characters and the movie’s overarching elemental motifs such as water, fire, earth, and wind. “There’s Olaf floating [around] an Alexander Calder mobile, or Elsa wandering through a forest of beautifully painted, multi-layered translucent scrims,” Winton explains. 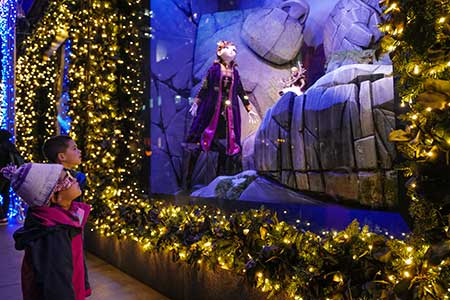 One of the center-six Fifth Avenue windows.

This year, Saks has introduced an immersive Enchanted Forest experience, a first for the store, on the flagship’s ninth floor. When immersed, you can expect to be transported to the world of Frozen, almost like stepping into a magical dream. “You feel like you’re deep in the forest, or dodging the waves, or finding yourself amongst these infinite crystals,” Winton teases.

Proceeds from ticket sales will be donated to the New York-Presbyterian Phyllis and David Komansky Children’s Hospital. The experience will run through Christmas Day, December 25.

As for whether the Saks team feels the pressure and expectations to come up with a bigger-and-better display every year to outdo themselves? “Of course,” says Winton, “Which gives us quite a task for 2020.”

Images courtesy of BFA for Saks.